This term, in the English subject, I read «the BFG» by Roald Dahl. This author has no brothers or sisters, and when he was 4 years old, her mother died. He was born in 1916 and he died in 1990, with an age of 74 years. The characters of this book are: the BFG, Sophie and the queen.

This book, talks about a girl called Sophie. One night, she sees the BFG. He takes her to his cave. Finally, they start being friends. Then, the BFG talks her about his ears. He says that he could hear the dreams and then he catches them and put the dreams into jars.

Later, the BFG takes Sophie to a secret place where the BFG can catch dreams. After that, the BFG talks Sophie about his name. He says that his name is standing for the Big Friendly Giant. 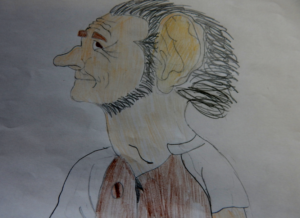 Finally, the BFG says to Sophie that all the nights, other giants eat some people, so they decided to rescue that people. After trying hard, they saw that they couldn’t stop the giants so they thought that telling the queen could solve the problem. Later, the queen captures the giants and all the people were happy.

I enjoyed very much this book and I would recommend it to all the girls and boys who enjoy reading. This is a fantasy novel.